Question: -8(a) Explain the main issues of code generation  in detail.

Answer: – Issues in the design of code generator are:

Answer: – Definition: Peephole optimization is a simple and effective technique for locally improving target code. This technique is applied to improve the performance of the target program by examining the short sequence of target instructions (called the peephole) and replace these instructions replacing by shorter or faster sequence whenever possible. Peephole is a small, moving window on the target program.

So The peephole optimization can be applied to the target code using the following characteristic.

3. The flow of control optimization

Question: -9(a) Explain DAG representation of basic blocks in detail.

Characteristics of DAG are:

Algorithm for Construction of DAG

There are three possible cases to construct DAG on three address code:

DAG can be constructed as follows:

For case 1, create a node with label op whose left child is node y, and node z will be the right child. Also, check for any common sub expressions. For case 2, determine if a node is labelled op. such node will have a child node y. for case 3 node n will be node y.

Consider the first statement, i.e., a = b * c. Create a leaf node with label b and c as left and right child respectively and parent of it will be *. Append resultant variable a to the node *.

For second statement, i.e., d = b, node b is already created. So, append d to this node.

For fourth statement b = e, append b to node e. 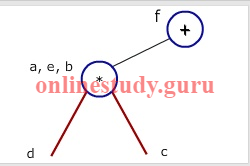 For fifth statement f = b + c, create a node for operator + whose left child b and right child c and append f to newly created node + 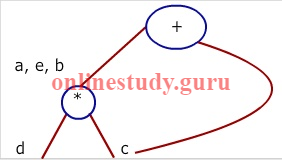 should not only save the CPU cycles, but can be used on any processor.

If expression generates a constant value then instead of performing its calculation again and again we calculate it once and assign it.

Dead code is one or more than one code statements, which are:

Thus, dead code plays no role in any program operation and therefore it can simply be eliminated. 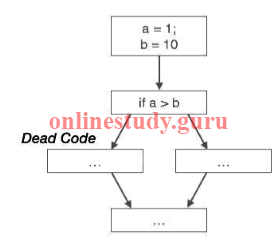 We are going to perform optimization on loops.

It specifies on a condition if we perform some operations to be carried out and then compare for a condition.

It specifies the operators such as multiplication and division can be replaced by a addition and subtraction respectively.

The multiplication operator can be easily replaced by left shift operator a<<1 Division can be replaced by a a>>1 operator.

In this case if a expression inside a loop is not dynamically affected by a loop we calculate it outside the loop and use the value inside the loop.

It specifies the values in a particular loop to be assigned to a array keeps of varing i.e the array location in which a loop need to be work again and again. We can use two different loops which allows loop distribution

At compilation level, the compiler searches for instructions redundant in nature. Multiple loading and storing of instructions may carry the same meaning even if some of them are removed. For example:

We can delete the first instruction and re-write the sentence as: