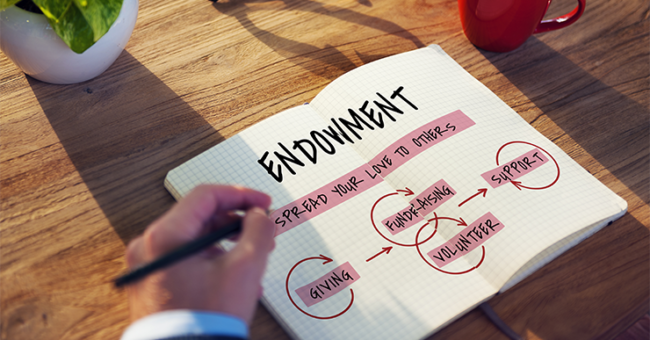 A calculated amount per the Regents or Campus Foundation policy-determined rate that is taken from the value of the principal of an Endowed Fund each year and provided for expenditure to meet the specified donor or campus use.

The annual payout generated by any UC San Diego endowed fund, whether Regents or Foundation-held, should be expended within two fiscal years of receiving the payout. Benefitting departments should budget for the use of Endowment Payout in their annual processes and review the uses for adherence to donor and campus allocation agreements, and PPM 410-5 Policy on Timely Expenditure of Endowment Payout and Expendable Gifts.

How is an Endowment Invested?

The Regents have received and manage endowed gifts directly for the benefit of each campus, including UC San Diego, and those funds are invested by the Treasurer’s Office of the Regents in their General
Endowment Pool (GEP).
The Foundation’s endowment is separate from that of The Regents, and is invested based on a policy approved by its Board of Trustees, and carried out by its Investment Committee. The Foundation uses both UC pooled funds and separate investments for its endowments.

Per UC General Endowment Pool Investment Policy Statement, the total return expenditure (spending) policy for eligible assets in the General Endowment Pool is 4.75 percent of a 60-month moving average
of the market value of a unit invested in the GEP. In addition, there is an endowment administration cost recovery rate of 0.55 percent to recover reasonable and actual costs related to the administration of gift assets invested in the GEP. Endowment Payout Fund Ranges: