Question: -4(a) How data is coordinated between multiple forms? Also write a pseudo code to add and load new forms at run time.

If you want Form2 to be able to communicate with Form1, you need to supply a reference to Form1. Once you do this, you will be set up for two-way communication, as both forms will be holding a reference to the other. The simplest way to accomplish this is to add a public variable (of type Form1) to Form2, like this:

Then, right after you create an instance of Form2 in the button click event , you can set this property.

Listing 3.21 You Can Pass a Form Reference with a Property

If myForm Is Nothing Then

If code in Form2 needs to access Form1, it can now do so through the myCaller variable. Add a button to Form2 and put this code into it

Note The code should be changed in Visual Studio 2005 or in Visual Studio 2008. When you create a Windows Forms project, Visual C# adds one form to the project by default. This form is named Form1. The two files that represent the form are named Form1.cs and Form1.designer.cs. You write your code in Form1.cs. The Designer.cs file is where the Windows Forms Designer writes the code that implements all the actions that you performed by adding controls.

2. Add the following code to the Form1_Load event procedure to customize the appearance of the Button control:

3. Add the following code to customize the appearance of the TextBox control in Form1_Load:

4. Add the following code to customize the appearance of the ListBox control in Form1_Load:

5. Add the following code to customize the appearance of the CheckBox control in Form1_Load:

6. Add the following code to customize the appearance of the Label control in Form1_Load:

Add Controls to the Form

Question:- 5(b) Explain Various drag and drop operations in VB along with events related to them.

In computer graphical user interface drag & drop is the action of clicking on an object (virtual object on screen) and dragging it to a different location (on screen) as required.

The basic sequence involved in drag & drop is

The drag-n-drop is programmatically done and it is widely used in creating objective type questions.

Drag and Drop Events
A drag and drop event takes places between two objects. At one object a drag is initiated and at the second object a drop takes place.

When the drag begins, the first object’s does not experience an event. VB silently handles the creation and movement of the drag icon. When the mouse is released, signalling a drop operation, the DragDrop event of the receiving control is fired and any code in that event is executed. If the DragDrop event has no code, then nothing else happens.

A second event is possible, which is the DragOver event. After a drag is initiated and at the moment the drag icon is moved over another control, that control’s DragOver event is fired. It’s only when the mouse button is released that the DragDrop event takes place on the receiving control.

The dragdrop can be very useful, users know how to use it and users see it in most of the popular shrink wrap applications. With that background, how can you not put it into your own application? Well, first of all, not every application can be made easier to use by simply tossing in some drag and drop features. In my own experience, I use drag and drop in only 1-2 out of ten programs I write. It has to add significant value to be worth the time it takes to program.

There are only two event to worry about, the DragDrop and the DragOver, so it won’t take long to cover them both. In this example, the events of a form (Form1) are examined:

Both events share the common arguments Source, X, and Y, whereas the DragOver events includes the additional argument State.

The only two properties of a control which affect a drag and drop operation are:

Question:- 5(a) “VB has rich set of library function”. Justify the statement by giving a classification of various in-built function with syntax and their use.

Answer: – We will give the syntax, discussion and examples of each of the functions listed to the left as we go down the page. We didn’t create these Access database functions so most of the syntax and usage information is taken from the Microsoft Access Visual Basic help system. We have added our own notes and discussion to help clarify the functions where we can. Let’s get started!

The Visual Basic Abs function simply removes the sign from a number returning a positive value.  This is useful for calculating the absolute difference between values and adding them differences up.  You would first use the Abs function before adding the values.

This example uses the Abs function to compute the absolute value of a number.

The Microsoft Access Array function establishes an array (list) of values.  To create a constant array you define the array name as a variant.  See below;

You can then refer to an array element by its integer position starting at 1:

The Msgbox above will display the number 10

The VBA Asc function returns the ASCII character code for the 1st letter in the Asc argument:

This example uses the Atn function to calculate the value of pi.

When Visual Basic is launched from the command line, any portion of the command line that follows ‘ /cmd ‘ is forwarded to the program as an argument. In the example below, cmdlineargs is the argument information returned by the Command function.

For applications created with Visual Basic and compiled, Command returns any arguments that appear after the name of the application on the command line. For example:

Question: – 5(b) Explain how File Open common dialog box can be used to open an image file in image control? Also write some important properties of it.

Answer: – The Open and Save As dialog boxes are commonly used for opening and

saving files in most Windows applications. VBA makes these readily available for use in your applications, via the Microsoft Common Dialog Control. All you need do is add the control to the Toolbox in the VB Editor.

VBA is extremely powerful and can use many of the controls supplied with the Windows applications you have installed on your computer. A complete list of the controls available on your PC can be viewed from the Additional Controls dialog box. You can add any of these controls into your Toolbox, from which you can then drag and drop them onto UserForms in the normal way. These controls retain their full functionality, making them extremely reusable.

If you have to distribute your application, it’s best to stick with the plain-vanilla controls provided by default. Just because a control is present on your PC doesn’t mean it will be on others—unless the user has previously installed an application that uses this control.

Here are the steps for adding the Common Dialog Control (or any other controls listed on your PC) to the Toolbox. (I hope you have this control on your PC; otherwise, you’ll need to use a macro like GetNewFile to open a file and write a macro for saving a file.) 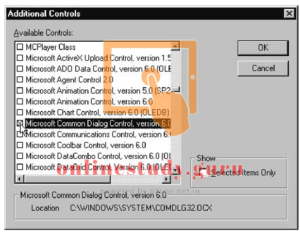 If you want to remove the CommonDialog control from your Toolbox, simply right-click its Toolbox button and select Delete CommonDialog from the pop-up menu.

The CommonDialog control provides a set of common dialog boxes with appropriate controls already set up. These predefined dialog boxes are used throughout most Windows applications and will be familiar to you. In this section you’ll see how to utilize the Open and SaveAs dialog boxes contained in properties of this control.

The Open dialog box (Figure 12.2) displays the list of files and folders available from your PC, or on a disk or CD in one of the PC’s drives. 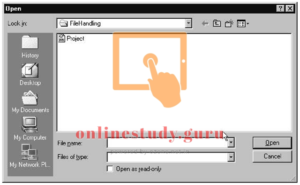 The CommonDialog control has its own set of properties and methods. For example, the ShowOpen method is used to display the Open dialog box, and the Filter property can be set to restrict the types of files that will be included in the list of files. Setting the Filter property in the Properties Window to that shown in Figure 12.3 will display “All Files (*.*)” in the Files of Type box.

The Filter property can also be set in code, as follows:

Exercise 12.2 shows the effect of setting the Filter property on the File Types list in the Open dialog box.

Listing 12.5 shows how to set up a more complex filtering system that contains a list of filters, and how to designate one of them to be displayed in the Files of Type box when the dialog box opens.

Here are the steps for using the CommonDialog control in an application: 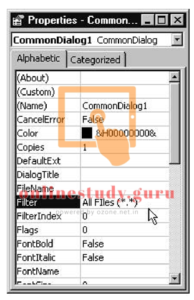 You’ll find it impossible to resize the CommonDialog control; VBA won’t let you. When this control is placed on a UserForm during design time, it appears as a square button with its own little icon. When the UserForm is displayed to the user during run time, this control becomes invisible. 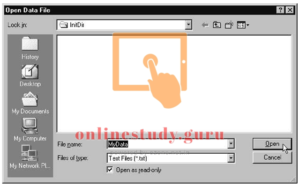