So a single pass assembler, the biggest problems is forward references. The classic problem of if you jump to a forward label, it won’t know automatically if you need a near, or a far jump. So you either have to state it explicitly, or the assembler may have to just make everything far.

Any forwarding label reference will cause problems. Suppose you want to compile in an array of chars, and you want to calculate it’s size. You can only do this calculation AFTER the definition. You can’t place it before in a single pass assembler, because it won’t know those addresses until the compiler has already gone past them.

The other big disadvantage, is a single pass assemblers traditionally don’t really generate a symbol table, or object code. So you can’t “link” it with anything else. There is no object file generated so that you can link it with other languages, or other assembly modules. 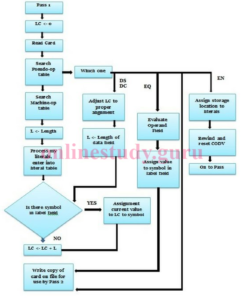 Two-pass assembler: Assemblers typically make two or more passes through a source program in order to resolve forward references in a program. A forward reference is defined as a type of instruction in the code segment that is referencing the label of an instruction, but the assembler has not yet encountered the definition of that instruction.

Pass 1: Assembler reads the entire source program and constructs a symbol table of names and labels used in the program, that is, name of data fields and programs labels and their relative location (offset) within the segment.

Pass 1 determines the amount of code to be generated for each instruction.

Pass 2: The assembler uses the symbol table that it constructed in Pass 1. Now it knows the length and relative of each data field and instruction, it can complete the object code for each instruction. It produces .OBJ (Object file), .LST (list file) and cross reference (.CRF) files. 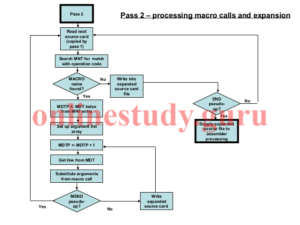 Question: – 2(b) what are Different loading Schemes? Explain absolute loader scheme with its advantages and disadvantages.

1. Absolute loader:-The task of an absolute loader is virtually trivial.The loader simply accepts machine language code and places it into main memory specified by the assembler.

Simple to implement and efficient in execution.
Moreover, Saves the memory (core) because the size of the loader is smaller than that of the assembler.
Allows use of multi-source programs written in different languages. In such cases, the given language assembler converts the source program into the language. And a common object file is then prepared by address resolution.
The loader is simpler and just obeys the instruction regarding where to place the object code in the main memory.

2. Relocating loader:- The task of relocating loader is to avoid reassembling of of all subroutines when a subroutine is changed and to perform tasks of allocation and linking for programmer.

3. Dynamic Loading:- In order to overlay structure to work it is necessary for the module loader to load the various procedures as they are needed.There are many binders capable of processing and allocating overlay structure.the portion of the laoder that actually intercepts calls and loads necessary procedure is called overlay supervisor of simplly flipper.this overall scheme is called dynamic loading or load on call.

4. Dynamic linking:- This is mechanism by which loading and linking of external references are postponed until execution time.This was made to sort out disadvantage of previous loading schemes like subroutine is referenced and never executed

Question: -3(a) What are the basics function of loaders? Differentiate linking, relative and bootstrap loader.

A loader is a major component of an operating system that ensures all necessary programs and libraries are loaded, which is essential during the startup phase of running a program. It places the libraries and programs into the main memory in order to prepare them for execution. Loading involves reading the contents of the executable file that contains the instructions of the program and then doing other preparatory tasks that are required in order to prepare the executable for running, all of which takes anywhere from a few seconds to minutes depending on the size of the program that needs to run.

The loader is a component of an operating system that carries out the task of preparing a program or application for execution by the OS. It does this by reading the contents of the executable file and then storing these instructions into the RAM, as well as any library elements that are required to be in memory for the program to execute. This is the reason a splash screen appears right before most programs start, often showing what is happening in the background, which is what the loader is currently loading into the memory. When all of that is done, the program is ready to execute. For small programs, this process is almost instantaneous, but for large and complex applications with large libraries required for execution, such as games as well as 3D and CAD software, this could take longer. The loading speed is also dependent on the speed of the CPU and RAM.

Though loaders in different operating systems might have their own nuances and specialized functions native to that particular operating system, they still serve basically the same function. The following are the responsibilities of a loader:

The basic functions of loaders
1. Loading – brings the object program into memory for execution

Question: -3(b) State the basics tasks a macro instruction processor performs. Explain how the nested macro calls are executed with an example.

A macro instruction is a group of programming instructions that have been compressed into a simpler form and appear as a single instruction. When used, a macro expands from its compressed form into its actual instruction details. Both the name of the macro definition and other variable parameter attributes are included within the macro statement.

Macro instructions were first used in the assembler language rather than a higher-level programming language. The way a macro expands to a set of instructions depends on the macro definition, which converts the macro into its detailed instructional form.

Macros save developers much time and effort, especially when dealing with a certain sequence of commands that is repeated more than once within the program body. Macros also save space and spare the programmer time spent on a long code block that may pertain to performing a single function.

The concept of macros is used within some precompilers, while higher-level languages focus on simplifying program and function writing, which makes the macro instruction a common element among most high-level programming languages. Macro instructions are generated together with the rest of the program by the assembler.

In the body of the macro OUTSIDE, the macro ISIDE is called. If OUTSIDE is called (and the list mode is set to $GENONLY), one gets something like the following expansion:

If macros are calling themselves, one speaks of recursive macro calls. In this case, there must be some stop criterion, to prevent the macro of calling itself over and over until the assembler is running out of memory! Here again, conditional assembly is the solution:

The macro COUNTDOWN is to define 16-bit constants from 1 thru n in descending order in ROM. n can be passed to the macro as a parameter:

After the Dark Ages, when the dust was settling and the sun broke through the gloom, computer science discovered the method of recursive programming. There was no doubt that this was the Solution!
And the computer scientists started to explain this to the students. But it seemed that the students didn’t get it. They always complained that recursive calculation of n! is a silly example indeed.
All the scientists felt stronly that there was still something missing. After 10 more years of hard research work, they also found the Problem.