CFG, on the other hand, is a superset of Regular Grammar, as depicted below: 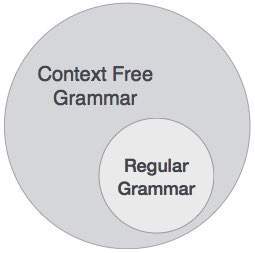 It implies that every Regular Grammar is also context-free, but there exists some problems, which are beyond the scope of Regular Grammar. CFG is a helpful tool in describing the syntax of programming languages.

CFGs are reduced in two phases −

Phase 1 − Derivation of an equivalent grammar, G’, from the CFG, G, such that each variable derives some terminal string.

Step 1 − Include all symbols, W1, that derive some terminal and initialize i=1.

Step 4 − Include all production rules that have Wi in it.

Phase 2 − Derivation of an equivalent grammar, G”, from the CFG, G’, such that each symbol appears in a sentential form.

Step 2 − Include all symbols, Yi+1, that can be derived from Yi and include all production rules that have been applied.

Any production rule in the form A → B where A, B ∈ Non-terminal is called unit production..

Step 3 − Repeat from step 1 until all unit productions are removed.

Remove unit production from the following −

There are 3 unit productions in the grammar −

Now Z, M, and N are unreachable, hence we can remove those.

In a CFG, a non-terminal symbol ‘A’ is a nullable variable if there is a production A → ε or there is a derivation that starts at A and finally ends up with

Step 2 − For each production A → a, construct all productions A → x where xis obtained from ‘a’ by removing one or multiple non-terminals from Step 1.

Step 3 − Combine the original productions with the result of step 2 and remove ε – productions.

Remove null production from the following −

There are two nullable variables − A and B

After removing B → ε, the production set becomes −

After removing A → ε, the production set becomes −

This is the final production set without null transition.

NEXT – Types of Parsing in Syntax analyzers